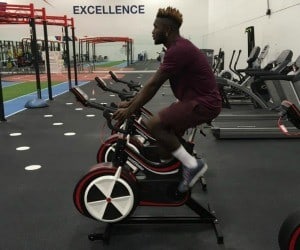 Success, who has now signed with the Premier League club until at least 2023, put in some pre-season work at our Ten Acres Lane base in the summer, following the completion of his loan spell at La Liga side Malaga CF.

The Nigerian international has since returned to Watford, having signed for them back in 2016, making 19 appearances for the Hornets so far this season in all competitions, scoring three goals.

The 22-year-old currently has four caps for Nigeria, with three of them coming in his breakout 2018/19 campaign.

Having worked with him in the summer, Wayne has been impressed with Isaac’s progress and said,

“When Isaac started the pre-season camp with myself, I mentioned to him that the upcoming season would be very important and so he would need to go in to it with a better attitude. With a new manager in charge, this would give him the time in pre-season to impress and stake a claim to be a first team regular”.

I was so pleased to see him go back fitter, stronger and with a better approach of being an athlete. His agent quoted the sports science department had mentioned that he [Isaac] was in the top group during the testing that they carried out during pre-season and that he looks fantastic and in the best shape that they’ve ever seen him”.

Wayne and everyone here at Richardson Sport would like to continue to pass on our best wishes to Isaac, in his current endeavours at Watford!