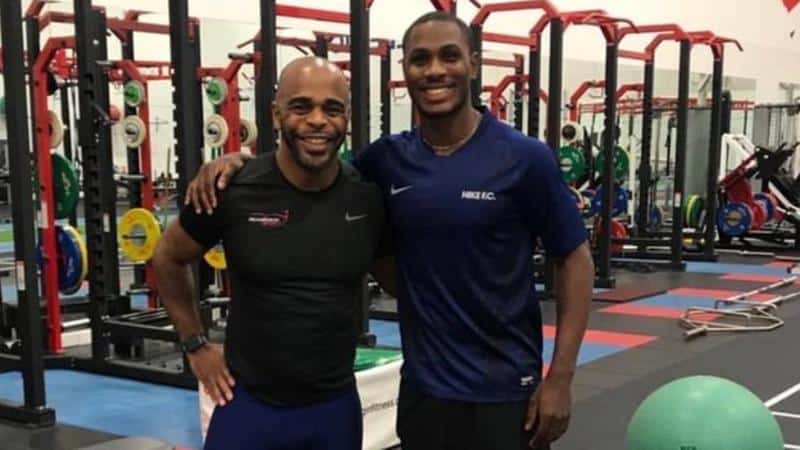 It was a session the same as any other for fitness coach Wayne Richardson when the footballer he was working with asked “can I have a chat?”

Richardson has now worked with over 5,500 players, with Odion Ighalo becoming one of his latest clients in February.

But that session at the Platt Lane Complex, Manchester City’s former training base in Moss Side, in 2006 still stands out.

A 22-year-old local lad had just been released by a Football League club and was hoping to get back into the professional game.

Richardson was helping him stay fit while he waited for trials with other clubs, yet that day they mostly talked – for two-and-a-half hours.

“He told me that his girlfriend was pregnant,” said Richardson. “Then he said ‘the problem is, she’s told me it’s not mine’.”

Richardson gave the best advice he could but knew “this player needed help”. He said he’d get that for him and, in the meantime, he was free to talk any time.

But at 3am the next morning he received a text message. That player had taken his own life.

“That’s when it turned for me,” said Richardson. “I knew from that day on I had a job to do.”

Richardson was working with Manchester City Council and Greater Manchester Police, mentoring young people who had been involved in crime, using sport to help improve their lives.

At the same time he was a part-time fitness instructor at the Platt Lane gym. He created a network, earning the trust of many aspiring athletes who approached him for individual fitness work.

Professional and non-league footballers also asked for help with their off-season programmes, but he became increasingly concerned about the mental welfare of academy players and free agents, culminating in that tragic text message.

“I was mentoring and you feel you’ve got a duty,” said Richardson. “You don’t want to go away thinking you could have done more.

“So I had a dream, a vision – to help players who had been kicked to the kerb.

“Their dreams have just been shattered.

“They’re young people and it affects them in different ways. And there could be other issues too, at home or at school.

“So forget about finding another club just yet. At first it’s about their state of mind and how can I help?”

‘It’s the mental side people need help with’

He set up his own business, Richardson Sport, in 2010, before sports science staff and psychologists were commonplace at Football League clubs.

He offered not just one-to-one fitness coaching but also sports mentoring, and was soon spending more time talking to players than training them.

Ten years on, he’s worked with the likes of Italy international Mario Balotelli, former West Brom striker Saido Berahino and Sheyi Ojo – currently on loan at Rangers from Liverpool. But the mainstay of Richardson’s business remains supporting grassroots and academy players striving to be signed by a club or kept on.

“The fitness bit is easy,” says the Mancunian, 47. “It’s the mental side of things that people really need help with.

“Sometimes players just need a sounding board, and can only talk to someone who’s independent; who isn’t family, their agent or with a club.

“Sometimes parents ring me and say ‘They’ve just been released. They’ve locked themselves in their room and won’t talk to us. Can you help?’

“They don’t know where to turn, or what happens next. They might say they’re alright but two or three weeks down the line they get a reality check. What’s happening now is similar.”

Agent Ladi Salami called Richardson on deadline day, 31 January. Ighalo’s loan move from China to Manchester United was done that night and three days later he was doing his first session with Richardson.

The Nigerian striker had to boost his fitness, having come straight from a pre-season, and he scored four goals from three starts before the UK’s coronavirus lockdown was announced. Richardson was then inundated with inquiries from professional players about similar sessions.

“We had to say ‘we cannot come to your house’,” he said. “This isn’t a job you can do from two metres away, you have to be hands on. The players like that because it mirrors the physicality they’d get in a game, and you can’t replicate it with online sessions.”

With the UK lockdown having entered a fifth week, the PFA’s director of player welfare Michael Bennett is “worried” now the “boredom factor is kicking in”, and each day Richardson spends more time speaking to players and parents about the uncertainty they face.

“So how do we keep players positive and focused?, he said. “Some have switched off because they think the season’s going to end. Others think ‘we’re just going to be playing the season out’ (if it resumes) or ‘we’re not going to win anything anyway’.

“At the moment my role’s more about psychology than fitness,” he said. “Players like routine and having an end game. Now they’re stuck at home and don’t know what’s happening.

“They’re becoming despondent, disillusioned, because there’s so much uncertainty over their future. It’s mainly players who are out of contract in the summer, but also players coming back from injury and academy players.

“They were told they’d still have a chance to prove themselves, but now they’ve been told they’ve not got a future at the club. It’s heartbreaking for them and they don’t know what to do next.

“It’s good for them to talk to a different pair of ears, and I try to reassure them, to keep them positive and focused, and keep their mind active. And it’s not just players. I’ve spoken to other fitness coaches who’ve said ‘I’ve just set up my business and now I’m going to lose everything’.”

A Fifpro survey, published on Monday, showed that 22% of female players and 13% of male players have reported symptoms consistent with depression.

The PFA has also reported a spike in players seeking mental health support in the first quarter of 2020. During the lockdown, PFA members can access counseling services remotely 24/7 via FaceTime, Skype and Zoom.

Richardson added: “I’ve been reaching out to everyone on social media, saying it doesn’t matter if you’re grassroots, academy or a pro, if you need my help I’m here 24/7. All I’ve ever wanted to do is help players. People forget they’re human beings.

“Mental health issues have been highlighted recently by Danny Rose and Raheem Sterling. You have to give them credit for that – and others who’ve spoken – because it’s now more accepted to come out and talk if you have an issue.”

The more players that can do that, the less chance of Richardson receiving another tragic text message.