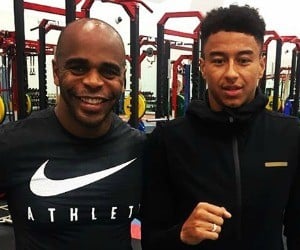 If you had turned up to a discreet 3G pitch in Newton Heath last summer you might have caught a glimpse of Jesse Lingard being put through his paces.

Not alongside his Manchester United team-mates, or with one of the numerous support staff employed by the Old Trafford giants, but alone, on a pitch tucked away in one of Manchester’s less-glitzy neighbourhoods behind the National Taekwondo Centre, a state of the art facility more used to shaping a succession of medal-winning fighters than hosting football royalty.

Alone, that is, apart from Wayne Richardson, a man who “wants to help”.

Lingard is one of a growing number of Premier League players who have turned to the fitness coach when they have needed a little extra – a programme to boost stamina, sharpen acceleration, help injury recovery or just feel up to the challenge of being their best.

But Richardson is just as likely to be putting in work with an academy prospect or a non-league journeyman as he is a player already at the top of his game, and it’s not just the body but also the mind he has become adept in caring for.

“It’s like being a social worker in some ways,” says the Leeds-based 46-year-old, who runs Richardson Sports with his wife, Emma Hughes.

“Especially with the young kids we deal with. We can get their bodies in top condition for them to do as well as they possibly can, but sometimes it’s just a case of listening, being a kind of mentor, then pointing them in the right direction if they need more specialist advice.

“We’re not agents and we don’t come between players and their clubs. But we’re here to improve them. Not make them Instagram-famous but put in real work – and the ones who do that see results.”

Famous Premier League stars usually have their own support systems, but others – Richardson’s youngest client was a six-year-old attached to Everton – can often need a more nuanced approach.

“We knew about senior pros from our earlier work, but more recently we thought, ‘What about academy players?’” Richardson says.

“There were around 1,000 released by clubs last year, only about one percent make it, what about them? How could we prepare them for the next step of their career?

“It became a one-stop-shop of fitness, personal programmes, impartial advice, what they need to work things out.

“We have come across kids with mental health problems and been able to direct them to the right people to help them.

“Mental health is a huge issue. Sometimes it’s a case of ‘you talk, I’ll listen’. But sometimes the problem is a lot bigger than us and we give them support and try to put them in touch with the right people.

“Strength and conditioning, sports science support, mentoring, advising parents – sometimes they need educating on how the game works. We want to see young people get the best advice and make good choices.”